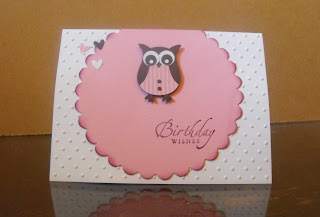 I sometimes wonder if I create anything original at all, all my offerings lately seem to have been copied or at least inspired by other people's gorgeous creations and this one is no exception, it was a swap I received at team training.
I have named this owl Ollie as while I was waiting for the photo to upload I remembered the soft toy I had as a small child.  He was a white owl but I remember he went everywhere with me and became very dogeared in the end.
The colour combination for this card is Rich Razzleberry, Pretty in Pink, Whisper white and Early Espresso.  The base card was run through the Big shot in the polka dot embossing folder, the pink scallop circle was also cut with the big shot and edged with razzleberry ink to add some depth.  I punched the owl in cardstock and in designer paper stack so that he could have a snazzy waistcoat and then 3d mounted him. The greeting is from sincere salutations and is stamped in razzleberry ink. 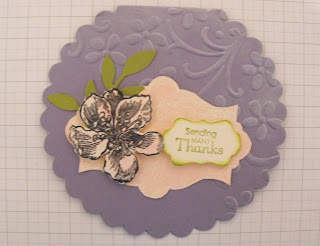 Today I have a card to share that we made at team training last week.  We used a stamp set that is from the new catalogue, released on 1 October so you are getting a sneek peek of a product that isn't yet available to buy but not long to wait thank goodness! The base card is made using the large scallop circle die in the Bigshot, the colour is Wisteria Wonder, one of the new In-colours for 2011-13 isn't it gorjuss!!!  We embossed it, again using the bigshot, and dusted over the embossing with shimmer paint which gives it a gorgeous lustre.  The stamps are from the new catalogue too, called Everything Eleanor.  I think I will be getting a lot of use from this set. 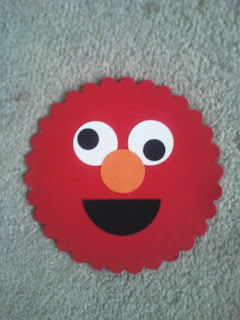 This post was supposed to publish with a photo but Blogger isn't playing ball today so I will have to edit it later on,

Everyone loves Elmo don't they? Well I know I do, so, when I found that it was easy to make my own in card form using the Bigz circle scallop dieand my Big Shot, I thought I would share it with the ladies who are coming to my Make, Do and Send Card club tonight.  I attached two real red scallops together to make the card and then used lots of punched circles in various colours to make his face.  I reckon that some of the other Sesame St characters could be made this way too.

Kazza
Hounslow, Middlesex, United Kingdom
I am a Mum of two, one girl, one boy, both teenagers now. I have been a Stampin Up! Demonstrator since October 2010 and I love sharing the products and creativity. I am addicted to papercrafting and spend any other spare time Scouting. Far too many weekends are spent at cold wet campsites but it's all good fun really. Please feel free to have a good look round and give me a shout if I can help in any way. I am more than happy for you to share any of my creations all I ask is that you give me a credit and link back to my blog. Happy Stampin!